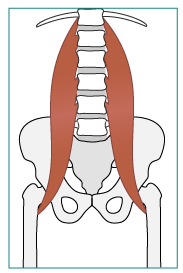 Technically, we have five main hip flexor muscles, but one of them seems to be in the spotlight much more then others – the “mighty psoas”. Psoas seems to be one of the most popular muscles; it’s been a subject of countless articles, several books and I wouldn’t be surprised if there is a song about it somewhere out there. It has many nicknames: “opinionated psoas”, the “hidden prankster”, the “great pretender” and many others. It’s been claimed that the psoas is vital for physical, emotional and spiritual well-being. This love affair resulted in countless suggestions on how to access and stretch the psoas, which commonly boils down to a knee-to-the-chest type pose or a lunge of some sort. The question is though – is it always appropriate to stretch a tight psoas? And is there a difference between psoas stretching and releasing? Let’s explore.

The reason psoas is so popular is because it has many important duties. On the structural level, it is responsible for stabilizing the spine and flexing the hip. It also assists in rotating the hip outward and adducting it (moving it toward the midline). One of the most significant things about it is that it connects the legs to the spine, which means that what you do with your legs might affect your spine.

The fact that psoas has so many duties means that it can become overworked and tight. 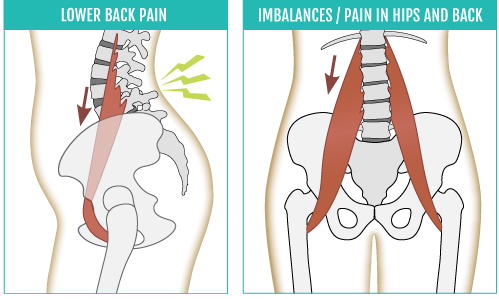 We tend to think of the psoas as a villain, because tight psoas can pull the spine out of alignment. But it can also become a victim. It works best if it has help from the muscles at the front and the back of the torso to help keep the body properly aligned, especially when it comes to maintaining the integrity of the spinal curves. If those surrounding muscles get tight and pull the pelvis put of place, this can put unnecessary stress on the psoas and impede it’s function.

Let’s say you sit all day, placing your body in an unfavorable position. As a result, your buttocks and your rectus abdominis will get tight, facilitating the backward tilt of the pelvis. Then you get up and go to the gym, where you work on 6-pack abs and “buns of steel”, which will only perpetuate the same pattern. Yes, it is useful to work on your core strength, but abdominal crunches won’t get you there. And yes, it’s important to keep your buttocks strong, but too much “steel” back there – in form of short, tight muscles – will limit the range of motion in your hips and will cause your lower back and your knees to compensate.

This means that psoas will contract in its attempt to stabilize the pelvis against the pull of the buttocks and rectus abdominis.  Now if you start stretching the psoas and do get it loosened up, it means that the buttocks and rectus abdominis will be free to continue pulling the pelvis out of place and contract even more, which, in turn, will put more stress on the psoas. See the vicious cycle? The solution here would be to release tension in the glutes and abdominals first, before attempting psoas stretching. Even simple movements like this can do the trick:

Or, let’s say your lower back gets tight pretty easily (indicating some shortening of the erector spinae muscles). Couple that with the thigh tightness and weak abdominals (which also can happen if you sit a lot) and your pelvis will tip forward, exaggerating your lumbar curve.

This type of positioning will create a strong pull on the psoas, which means that it will become stressed and fatigue easily. Stretching an already pulled and stressed muscle is not the best idea. It makes much more sense to gently contract it first to increase the blood flow to the area, then relax it and only then try to loosen it up, if necessary (read more about Contract-Relax-Stretch principle).

Whatever postural imbalances we develop, the psoas is literally caught in the middle.  So it is useful to figure out first if your pelvis has a tendency to tip forward or back, and then work on releasing the offending muscles before tackling the psoas.

Another issue that is commonly missed is that the psoas has a partner in crime – iliacus. They pretty much do the same thing and share a common tendon at the attachment point at the leg, but iliacus originates at the pelvis, instead of the spine. Iliacus can be a bit harder to access then psoas, but it’s worth trying because sometimes it will be the root of the problem, not its buddy the psoas.  It’s actually pretty easy to figure out who is the troublemaker – if you ever experience discomfort on the inside of the hip bone and it intensifies when you attempt to stretch the psoas, you’ll know that it’s a tight iliacus. Iliacus does not have the same track record of pulling the spine out of alignment, but it, too, is affected by imbalances in the supporting musculature.

If you choose to work with the iliacus directly, you can try some variations of the following movements:

Of course, all of the above becomes even more complicated because we have a pair of each one of those muscles. It means that the two sides might not develop or tighten in a symmetrical fashion, which will promote further instability and misalignment.  The trick here would be to identify how one side is different from the other and then work with the two sides separately and maybe in a slightly different way. If you don’t feel confident in how to proceed with that, it’s best if you seek help from a qualified yoga therapist.

The bottom line is this – if you’ve been running or sitting for a while, don’t get up and go straight for psoas stretching – it might be destabilizing and ineffective. Instead, begin by loosening up the supportive musculature.  And oftentimes contracting the psoas will be more effective in releasing tension there then stretching. Also remember that it might be the iliacus that’s causing the problem, so make sure to attend to it’s needs as well.

Here is an example of a yoga practice for the psoas and iliacus (sequence and video). Check it out!

Additional information about the psoas

Beneath the Surface by Doug Keller

The Psoas: Muscle of the Soul by Danielle Prohom Olson