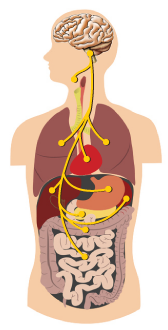 The vagus nerve can be thought of a superhighway that connects your body and your brain. It innervates most organs in the body; the messages zip along its five lanes of traffic with four lanes delivering information from the body to the brain and one lane moving information from the brain to the body. This is the most obvious physical representation of the mind-body connection. The vagus nerve both senses your internal environment (via its sensory neurons) and affects it (via its motor neurons). Since a lot of the nerve’s function depends on which way the information is going, from here on we will separate those into body-to-brain and brain-to-body pathways.

Some of the functions of the vagus nerve have been long established, while others were discovered only recently. No doubt, within the next few decades we will continue to learn more and more about it, since electrical stimulation of the vagus nerve for conditions including epilepsy, rheumatoid arthritis and depression is becoming an alternative to drugs.

Here is what we know about the vagus nerve so far:

1. It is intimately involved in managing sympathetic/parasympathetic balance in the autonomic nervous system (ANS). Here is a quick reminder how ANS works.

The vagus nerve provides 75% of all parasympathetic outflow. When the brain triggers parasympathetic activation, the vagus nerve carries the messages to the heart (decreasing the heart rate and blood pressure), to the lungs (to constrict the respiratory passageways), to every organ in the digestive system (to increase motility and blood flow to the digestive tract, to promote defecation), to the kidneys and bladder (to promote urination) and to reproductive organs (to aid in sexual arousal).

2. It communicates messages between the gut and the brain. 80% of the vagus nerve’s fibers (4 out of 5 traffic lanes) deliver information from the enteric nervous system (the second brain in the gut) to the brain.

4. It helps decrease inflammation. About 15 years ago neurosurgeon Kevin Tracey and his colleagues found that a tiny amount of an anti-inflammatory drug in rats’ brains blocked the production of an inflammatory molecule in the liver and spleen. How did the signal get there? The researchers began cutting nerves one at a time to find the ones responsible for transmitting the anti-inflammatory signal from brain to body. “When we cut the vagus nerve, which runs from the brain stem down to the spleen, the effect was gone,” says Tracey, president and CEO of the Feinstein Institute for Medical Research in Manhasset, N.Y. Later they discovered that stimulating undamaged vagus fibers also had anti-inflammatory effects in animals (without the drug), which they attributed to the release of the neurotransmitter acetylcholine by the vagus nerve.

In 2011, other researchers at the University of Amsterdam implanted vagus nerve stimulators into 8 patients with severe rheumatoid arthritis (an autoimmune inflammatory condition that causes swollen, tender joints). After 42 days of vagus stimulation — one to four minutes per day — most patients experienced a significant reduction in their symptoms and two of them had a complete remission. Even those who have not experienced clinically significant improvements with the implant insisted that it helped them; nobody wanted it removed. (Here is a fantastic article about this study) 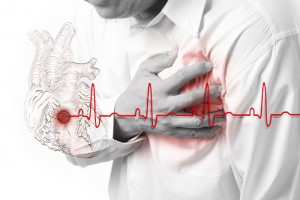 5. It has profound control over heart rate and blood pressure. For example, patients with heart failure, in which the heart fails to pump enough blood through the body, tend to have less active vagus nerves. Currently multiple studies are underway investigating the effects of vagus stimulation on patients with heart failure and atrial fibrillation (where the heart flutters erratically). (Read more about the heart research here)

7. It is essential in fear management. Remember that “gut instinct” that tells you when something isn’t right? Turns out that the vagus nerve plays a major role in that. The signals from your gut get sent to the brain via the vagus nerve, and the signals from the brain travel back to the gut, forming a feedback loop. What if this loop was interrupted – wondered the researchers in a new Swiss study – would that affect innate anxiety and conditioned fear? Turns out it does. In test animals, the brain was still able to send signals down to the stomach, but the brain couldn’t receive signals coming up from the stomach. The research showed that those rats weren’t that afraid to begin with (lower level of innate fear), but once they became afraid, they had trouble overcoming this fear even when the danger was no longer present (longer retention of learned fear). This shows that healthy functioning of the vagus nerve helps us bounce back from stressful situations and overcome fear conditioning.

8. It plays a role in learning and memory. The same Swiss study (above) found that the rats without gut instincts transmitting to the brain via the vagus nerve required significantly longer to re-associate previously “dangerous” environment with the new, “safe” and neutral situation. This shows that the vagus nerve facilitates learning and re-wiring, so to speak. “These new findings about the vagus nerve offer exciting possibility for the treatment of post-traumatic stress disorder (PTSD). Stimulation of the vagus nerve might be able to speed up the process by which people with PTSD can learn to reassociate a non-threatening stimuli which triggers anxiety with a neutral and non-traumatic experience”(1). It can also help with healing sexual stress and trauma.

9. It can help relieve cluster headaches. The company electroCore, based in Basking Ridge, N.J., manufactures a small, handheld device that can stimulate the vagus when placed on the throat. The company initially tested the devices to reduce asthma symptoms — relying on the nerve’s anti-inflammatory action. But during testing, patients reported that their headaches were disappearing, says J.P. Errico, CEO of electroCore. Now, the company is investigating the use of an electroCore device to treat chronic cluster headaches.(2)

All this research is very promising and is full of possibility. But, as always, we have to remember that nothing in the body works in isolation. So it would be very dangerous and cavalier to assume the attitude of “Just zap it and you will feel better” when it comes to the vagus nerve. Considering the nerve’s wide spread influence, we don’t know how electrical stimulation of the nerve would affect other functions. Some scientists compare it to turning on the light in one room in the house, which can simultaneously turn on the light in other rooms as well without us ever knowing about it. So when it comes to more invasive procedures such as surgery and the use of implants, caution is definitely warranted.

However, what I find the most interesting (and relevant to us, yoga teachers) is the on-going conversation about the vagal tone. Apparently, the secret recipe for de-stressing, healthy gut, less inflammation, and happy demeanor all lie in the higher resting vagal tone. Some of it is congenital (you might be born a “glass-half-full person” indicating a high vagal tone), and some apparently can be acquired. How can we raise the vagal tone without the invasive procedures? We will talk about it in detail next week. Tune in!