When you look at the structure of the hip joint, it becomes clear that it was designed to withstand some serious forces. The head of the femur (thigh bone) is embedded deeply in the acetabulum (hip socket) and is linked to it by the complex web of ligaments and muscles. If the hip was meant to be stable and strong, how come we have so many incidents of hip pain?

Those seemingly insignificant patterns of movement, like sitting with one leg crossed over another, driving around with a wallet in a back pocket or carrying a baby on one hip can literally come back and bite you in the butt, causing pain in the hips, buttocks, back and knees. Why do they create all those problems and what can we do about it? Let’s investigate.

First let’s take a look at the pelvis. When you think about it, it’s a pretty fascinating structure that links the upper and the lower body. It serves both as a platform, supporting the weight of the spine, head and shoulder girdle above; and a fulcrum, giving the spine the necessary leverage to remain upright. Without it we would still be running around on all fours. 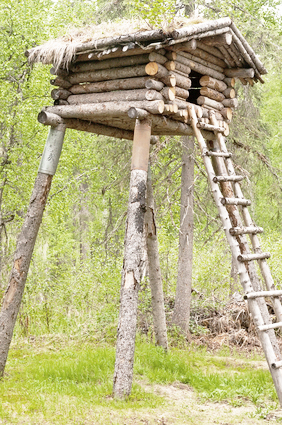 From below this platform of the pelvis is supported by two columns, the legs. Imagine for a moment a house on stilts. You will need at least four stilts for adequate support. If something happens to one of those stilts and it stops supporting it’s fair share of weight, it will cause some major changes in the entire structure. The house might begin to sag, form cracks and overall become less stable.

Our skeletal structure works the same way, only we have two stilts (legs) instead of four. The job of the pelvis is to transfer the weight of the structures above (head, spine, ribcage and their contents) into the earth. This transfer happens via the hip joints, and the bones and joints of the legs, which makes those joints weight-bearing. If either one of those joints becomes misaligned, the entire structure becomes destabilized.

Why would your joints get out of alignment? Because tight muscles pull bones out of place. If you consistently do some sort of asymmetrical activity that causes the muscles on one side of your body to tighten up, over time the tight muscles can change the alignment of the bones.

Let’s take a look at a seemingly innocent habit of sitting with one foot tucked under.

Do it enough times, and your body will reorganize itself, forming a new structural pattern.  Once this pattern is formed, other muscles will weaken or tighten to accommodate this “new normal”, to make sure that you are able to remain upright and move around.

If the pattern of movement remains uncorrected for a long time, it will affect the pattern of movement within the joint itself. The head of the femur will change it’s position within the socket and the trajectory of movement will be altered. As a result it might begin to rub and grind the areas of the hip socket that are not equipped to handle it. Over time this can lead to deterioration of the cartilage. This is the kind of stuff that contributes to degenerative changes that we’ve discussed earlier.

Pain is just an indicator that something is not right and can become a chronic problem if the movement pattern is not addressed.

What can we do about it?

First we need to identify the movement pattern(s) that’s causing the problem or contributing to it. Any type of asymmetrical activity is suspect here.  What makes things more complicated is that sometimes the activity happened a long time ago, but the dysfunctional patterns of movement were never resolved. I had a student once who at the age 60 was concerned that her hips felt and behaved very differently. Turned out that when she was a teenager, she had to wear a cast on her right leg for few months, which caused her to develop a pattern of swinging the right leg out and around when she walked. Since this pattern was never explored or corrected, even after 40 years she was still doing something similar when she walked. It is not easy to change a pattern that you’ve been reinforcing for 40 years.

Once you’ve identified the dysfunctional movement pattern, you will need to eliminate or change it. For example, if you are in a habit of favoring one leg while standing, try to remember to switch sides.

Then it’s time to investigate which movement relationships are compromised. Before you embark on correcting the imbalances, you need to find out what those imbalances are. They can show up in any of the following movements:

In addition, one side of the pelvis might be higher then the other (“hiked hip”) or displaced forward more then the other. There are certain poses that you can do to assess the asymmetries in your hips; here is an example of an exploratory practice for hip assessment.  Keep in mind, that the painful hip is not necessarily the problem. The painful hip might be compensating for the asymmetry or imbalance on the other side. We have to keep our eyes and minds open when we do the exploration.

Once you identify the type of motion(s) that’s problematic, you can begin to work with it in your yoga practice. Your goals will be to release chronic tension, strengthen what’s weak and to increase range of motion.

During the next 6 weeks we will explore every possible hip movement one by one. We will investigate the muscles that perform the action and discuss what we can do to make them stronger and, at the same time, more flexible, for the purpose of restoring structural symmetry and promoting better skeletal alignment.

As you begin the investigative journey of your structural alignment (or misalignment), it’s extremely important to continue monitoring the ongoing movement patterns. Being mindful about how we move our bodies seems to be the next step in the evolutionary process.

Check out the Hip assessment practice (video and sequence)!