Few years ago when I was traveling around New Zealand, I signed up for a white water rafting trip. Before letting us into the water the instructor said: “Make sure that you move from your center!” Once I got into the kayak and began to maneuver myself around the foaming rapids it became immediately clear that paddling from the core made all the difference. My stroke became much more powerful and I was able to direct my kayak where I wanted it to go (more or less), instead of being dragged around.

So what does it mean – to move from the center? It basically means initiating the movement by engaging your core musculature, which makes that movement much more powerful, whether you maneuver a kayak, hit a golf ball, paint your house or whatever. Moving from the center helps to generate force winding your body like a tight spring and then unwinding it to unleash the power. It also helps protect other joints (especially the shoulders) from overuse.

In the yoga practice we are not so concerned about throwing things as far as we can or fighting the elements. Here moving from the center takes on a different meaning. In yoga we initiate the movement from the center to make it potent and to link separate body parts into an integrated whole. Since centering in general is a huge part of a yoga practice, it is only natural that we try to manifest it on different levels of the practice. We do it by focusing our attention, becoming aware of the breath in the center of the body, using the breath to animate the spine and then mobilize the spine by initiating every movement from the center. When you throw a pebble into the water you can see the rings expand from the center outwards. In the same way in our yoga practice we want to begin the movement in the center and then expand the ripples of the movement, so to speak, out into the body periphery.

The following short yoga practice will help you become aware of the center of your body and teach you how to move from that center. It will also help you strengthen your core because ultimately core strength is not so much about individual muscle development, but more about all the parts working in unison to create stability and integration for whatever daily tasks you want to do. 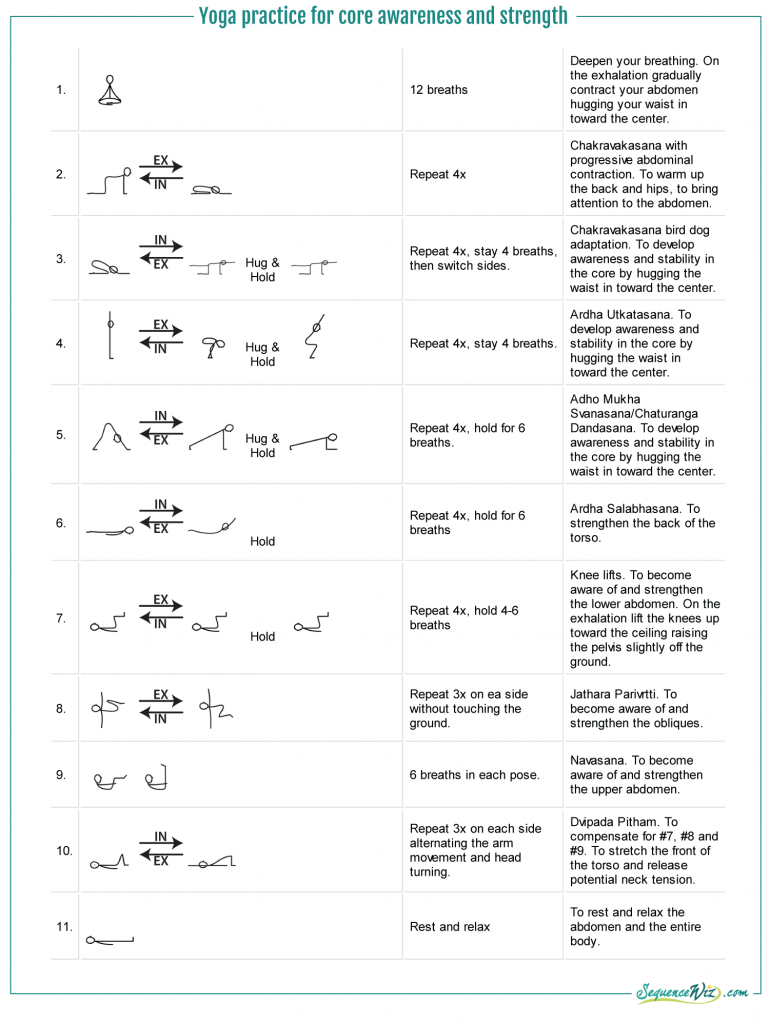 Join Sequence Wiz to customize this practice to your liking. Choose your poses, enter the instructions and you are done! See it in action >