When I was on vacation few weeks ago, I did my first SUP yoga session (yoga on a stand up paddle board). Practicing yoga to the gentle rhythm of the ocean waves was divine, but the way the practice was structured raised some flags for me. Our second yoga pose was Janu Sirsasana. I get the idea that you want to begin your SUP yoga practice with more stable positions, but unfortunately we see this pattern pop up in regular yoga classes as well. Even famous yoga teachers in glossy magazines talk about poses like Cow face and Pigeon as “opening poses”. Folks, this is downright dangerous. 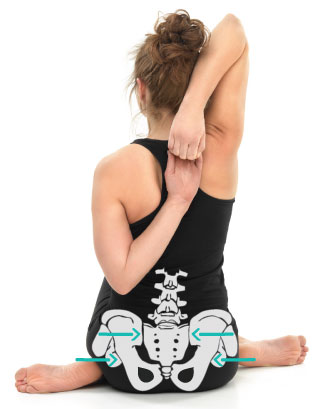 What do Janu Sirsasana and Gomukasana have in common? In both of them your butt is on the ground, which means that the position of your pelvis is basically fixed, as opposed to a standing posture, where it is free to move following the movement of your legs. So while in standing postures your feet form the base of support, in seating postures your pelvis becomes that stable base, and you arrange your legs and your spine against that base. When the position of the pelvis is fixed, the connection points between the pelvis and the moving body parts (spine and legs) will be challenged a lot, especially when you leverage yourself with the weight of the body and/or your arms. When I talk about connection points, I mean SI joints (which link your spine to your pelvis), and hip joints (which link your legs to your pelvis). So seated positions can be rather stressful for those areas, and those places need to be adequately warmed up and prepared for that sort of challenge.

Often your students come to your yoga class shortly after waking up or after sitting all day – their hips and backs will be stiff. If you ask them to fold into Gomukasana right off the bat, you are risking injury to their hip joints simply because they are not ready for that. Gomukasana is not a good preparatory posture because it involves leverage, both from the position of the pelvis and the position of the legs. Instead of warming up the muscles around your hips, you strongly pull on the ligaments of your hips. In addition, if you ask your students to bend forward, you will also pull on the sacroiliac ligaments.

Or take a look at Janu Sirsasana. Here the position of the body puts stress on the SI joint on one side. This stress will be greater if the body is not adequately warmed up, or if there is any sort of sensitivity there. 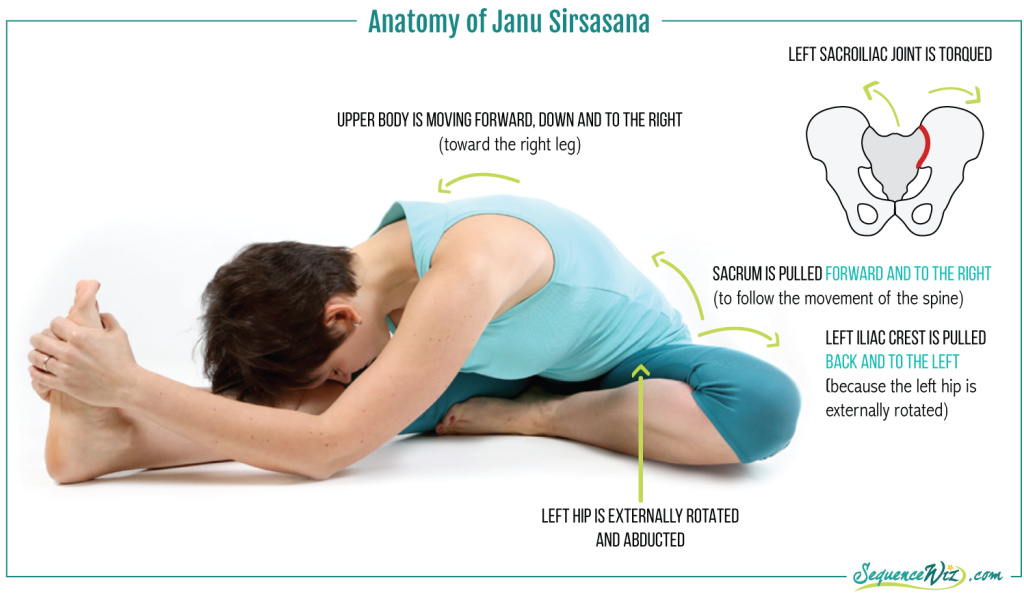 Because of the risks involved, in the viniyoga tradition seated poses are considered the most challenging of the bunch and are usually placed at the end of the practice. In fact, general sequencing would look like this:

STANDING POSES use large body movements to warm up the body properly and introduce whatever work you planned for the practice.

KNEELING POSES are used to compensate for the standing ones, to transition down to the ground and to continue the work that you started in standing.

PRONE POSES (on the stomach) are used to stabilize the sacrum and the lower back after whatever you did in standing and kneeling.

SUPINE POSES (on the back) are used to compensate for prone ones and continue to explore the work that you’ve planned for the practice.

SEATED POSES are used as culmination of that work. When the body is adequately prepared you can zoom in on specific areas and challenge yourself more safely.

SUPINE POSES are used to compensate for the seated work and help you transition into Savasana.

Somehow we’ve come to think that seated postures are less challenging then the standing ones, but it is the other way around, when it comes to the safety of your joints. Yes, standing poses can be more challenging from the perspective of the actual physical exertion, and that’s why you start with more simple ones and gradually build the intensity. And of course some students or circumstances will require more preparation before hopping into the standing postures. So you could do some kneeling things, like Cat-Cow, or some version of the magic three poses, or some other mild preparation to get things going.

Placing seated poses at the beginning of the practice is rarely a good idea. Most students won’t even be comfortable sitting on the floor without some sort of support at the beginning. Their hips will be tight; their backs will be sore. So beyond a few minutes of breath awareness or some basic cat-cow like movement, seated poses at the very beginning of the class have little value. Starting your yoga practice with Gomukasana or Janu Sirsasana is at best ineffective and at worst dangerous.