In the yoga world, if we get pain somewhere in the body, we take it as a call to action and begin to stretch that particular area. This approach is often ineffective, because in the words of prominent physiotherapist Diane Lee “It’s the victims who cry out, not the criminals.” This statement requires a fundamental shift in perspective – just because something is hurting doesn’t mean that it is the source of the problem. Now why is that? Why does the old pain in your right foot eventually shows up as tension in the neck? This happens because of fascia.

Fascia is that cotton candy-like connective tissue, that for hundreds of years had been carefully scraped off by anatomists to expose muscles and bones, and considered irrelevant. In the last couple of decades, however, fascia has been reclaiming it’s role as a vital whole-body communication network.

So what is fascia and why should we, yoga teachers and practitioners, care about it? Fascia is the connective tissue that serves both as a bag that holds muscles , bones, organs, etc, and the packing material in between those structures. It is comprised mostly of collagen fibers. For example, when you look at an individual muscle, you will see that fascia wraps individual muscle fibers, groups of fibers and muscle as a whole, becoming more dense toward the end and forming a tendon, which then seamlessly blends into the fascia that envelops the bone.

“Without it’s [fascia’s] support, the brain would be runny custard, the liver would spread through the abdominal cavity, and we would end up as a puddle at our own feet.” (1)

So the fascial system is an all-pervading physiological network, as important as the circulatory and nervous systems. It is a vast and truly fascinating subject, if you are interested in how the body works. Here we will focus on two qualities of fascia – its continuity and its ability to transmit tension.

As yoga teachers we always concern ourselves with the idea of connection (hence the definition of yoga as “union” or “linking”), yet we often fall into the mechanistic view of the body as a system of levers and pulleys. We tell students that “this pose stretches this muscle”, as if anything in the body works in isolation. In the world of fascia the muscle is linked to the bone, which is linked to the ligament, which is linked to another bone, and then a tendon and another muscle, etc. It’s perfectly fine to study muscle action, characteristics of ligaments, etc. as long as we remember that they are all part of an interconnected fabric within the body and affect each other constantly.

Beyond linking everything to everything, fascia has an important role of communicating mechanical information by the interplay of pulls and pushes. Just like a snag on a sweater can run across the fabric, the tension is transmitted in the same way from one place in the body to another via a fascial net. A human body is a constant interplay of internal and external forces that need to be balanced and distributed. As a result, there are predictable patterns of tension throughout the body that are necessary to keep us upright and allow a wide range of movement. “Strain, tension (good and bad), trauma, and movement tend to be passed though the structure along these fascial lines of transmission.”(1)

To describe those predictable lines of tension, Thomas Myers had adopted the term myofascial meridians (not to be confused with acupuncture meridians – a bit different). A myofascial meridian basically describes a line of tension that runs through a sheet of fascia that connects and envelops several muscles. I can’t help but think of a silly cartoon from my childhood of a cat and a dog pulling on a sausage link.

It is kind of like that. The casing of the sausage link is like fascia, while muscles form the contents. When it’s pulled in the opposite directions, the tension is created that is transmitted throughout the entire length. 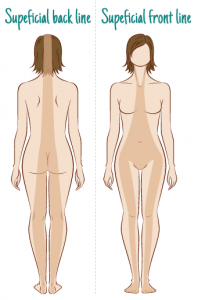 Let’s take a look at two “cardinal “ myofascial meridians: Superficial front line and Superficial back line. Just by looking at them it is obvious that SBL and SFL need to balance each other to support the upright position. If the SBL becomes too tight and shortens, you will end up with a “military” posture with some or all posterior (back) muscles shortened and bunched, and the anterior (front) muscles pulled and strained. Or the reverse can be true as well in a “collapsed” posture with a rounded thoracic spine and flattened lumbar curve. The military posture might come with tight hamstrings, but if you only focus on stretching the hamstrings, you won’t resolve the issue. This is where we need to look at the body wholistically (as a whole) and identify the patterns of tension that run throughout. 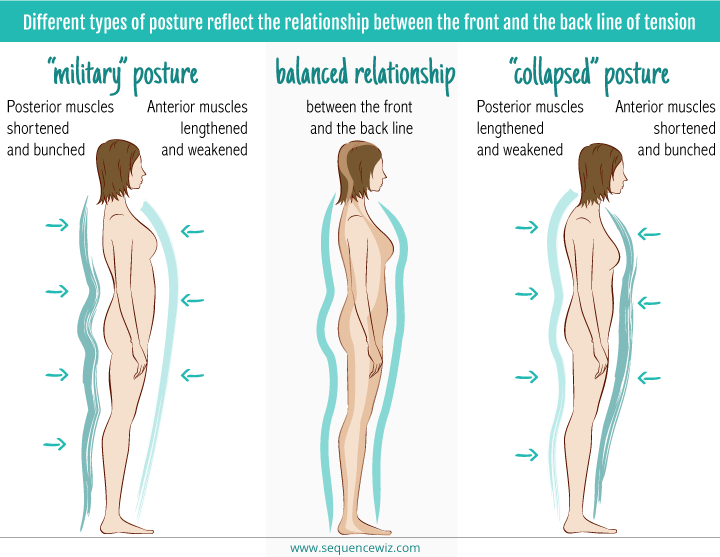 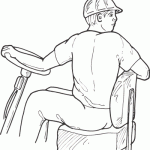 Some patterns of tension are predictable because of body’s organization; others are unique because of the movement patterns, past injuries, etc. Basically, your body responds to the loads that you put on it. For example, one of my former students who spent 30 years driving a folklift in this position, developed his own unique pattern of tension that spiraled around his body and manifested as severe hip and sacrum pain. Just working on his hips wouldn’t be enough, since his hips were the “victims” of this entire unfortunate movement pattern.

In words of Brooke Thomas, “We become the shapes and movements that we make most of the time.”(2) And those patterns do not go away when we go to a yoga class. If a student of mine is used to hiking her right hip up while walking, she will do the same thing while attempting the tree pose. This is where awareness comes in. If we do our yoga practice on autopilot, we reinforce the patterns that we already have. If we pay close attention to what we are doing, we have a chance to overcome those habitual movement patterns. This is one of the reasons we repeat each pose a few times before we hold it – it gives us an opportunity to examine our movement patterns and correct them if necessary (read more about it).

2. Brook Thomas Why fascia matters  – Free, down-to-earth, fun look at fascia and why it matters.

If this article makes sense to you, please spread the word!