For the past couple of years I’ve been trying to figure out this mysterious pain in the right hip that I would always get on the third day of any vacation. Did it show up because of sitting in awkward positions during travel? Different bed? Less yoga? Increased stress before the trip? All those factors would certainly contribute, but they didn’t seem enough to trigger the pain with such intensity. And finally on my last vacation I had a revelation (hallelujah!) 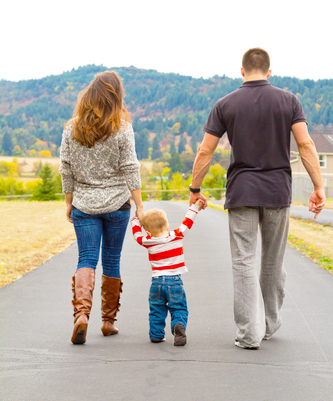 You see, I have a four-year-old son, and when we travel together as a family, my husband and I like to walk holding his hands on both sides – I usually hold him with my right hand so that I could have more control over where he goes. We usually do a lot of walking the first couple of days of any vacation, and my son has a habit of lifting both feet off the ground as we walk. He usually does it suddenly, so the entire right side of my torso has to contract immediately to support his weight (40 pounds) and my right hip takes on a huge extra load (while moving). As a result the muscles on the right side of my body go into spasm, they pull my sacrum out of alignment and the entire right side of the body goes bonkers.

Very often some really simple behaviors can cause a lot of trouble. Some of them create the imbalances in the body if repeated many, many times, while others serve as the proverbial “last straw that broke the camel’s back,” compromising the body in the most vulnerable area.

That is why the very first thing we should do if we start having any kind of chronic pain is to analyze our behavior. What might be causing this? It is important to identify the behavior so that you can stop it or modify it. In my situation, once I discovered the culprit of my “vacation hip problem” I could stop it by simply not holding my son’s hand if my husband was holding his other hand – that way he had no opportunity to play monkey. Sometimes it is not possible to stop the behavior – for example, if you are a writer, you cannot stop using the computer, but there are always steps that you can take to modify your body positioning, shorten the stretches of time that you engage in the behavior continuously, and do other things (like yoga, exercise, etc.) to balance it out.

However, it is not always easy to pinpoint the issue and it might take some time to investigate the problem. A few years back one of my teacher-trainees started having a wrist issue that was becoming really problematic. She stopped doing Chaturangas, limited her computer use and made many other small changes, but the problem persisted. Then one day as she was opening the front door of her office it dawned on her that the door handle was really tight and it took her considerable effort to turn the door knob to open it, which twisted her wrist and caused pain. She has been doing this action for many years several times a day and never gave it a second thought. Does it mean that the tight door knob caused her wrist issue? Not necessarily. But since her wrist was weakened by other things, it didn’t take much to throw it off balance. After swapping the old door knob for a new, more smooth-working one (and maintaining all the small changes that she had put in place), she was able to get rid of her wrist pain completely.

I like to think of it this way. Your body doesn’t like to be in pain; it is constantly striving toward the state of homeostasis. The pain is a signal that it cannot get there. Very often the habitual behaviors that we engage in stop the healing process and prevent the body from returning to the state of balance. Our job is to identify those obstacles and remove them, and then try to facilitate the healing process. Ultimately it doesn’t matter how much work you do on the body in your yoga practice or elsewhere – if you don’t change the offending behavior, you will keep having problems. 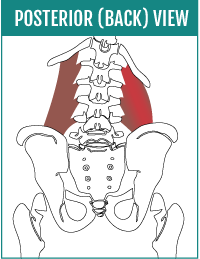 Identifying the behavior is also very useful in figuring out which areas to target in your work. For example, my “vacation pain” was moving from place to place – sacrum, hip flexors, lower back. Once I identified the problem it became clear that all the secondary pains were caused by a spasm in the qudratus lumborum muscle on the right side (from sudden shortening every time my son would hang on my hand). That shortening had created an imbalance in the position of the pelvis and the shoulder girdle, which caused those “wondering” pains. It is always useful to identify the source of the problem so that you know what areas to target. Relieving tension in the quadratus lumborum muscle helped me restore balance in the body and get rid of the secondary pains.

Private yoga sessions are very useful in identifying those habitual movement patterns and initiating the process of recovery. Students often have trouble identifying the pain-causing pattern, and even if they do figure it out, they usually have no idea what to do about it. During my last family reunion one of my relatives had complained about persistent hip pain; after a short movement investigation it was clear that she had some imbalances between her adductors and abductors on her left side, but I still wasn’t sure what was causing the problem until she said that it seemed worse after playing tennis. So I asked her to show me some of her tennis moves and it became immediately clear that every time she lunged forward to hit the ball her left knee had buckled in, irritating her hip. 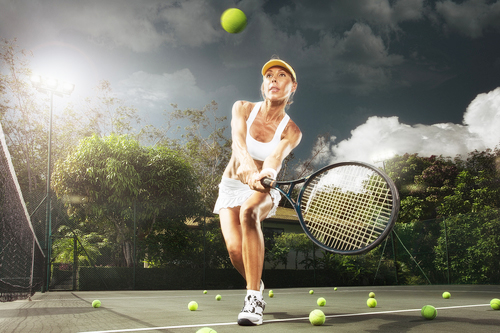 Once we identified that pattern, I asked her to do some simple standing “ballerina half-circles” and some clam shells on her side. That was the extent of our private work. About a week later after the vacation I got this email from her: “Ur the best. Hip is SO much better. Doing clam moves and hip sweeps (?). Much less pain. Thank you.”

It is not always so straightforward though. Often several different things get tangled together and go on for so long that it becomes very hard to untangle them. One of my former clients had had an immobilizing cast on her leg when she was sixteen years old and developed a habit of dragging that leg around in a half-circle. This pattern was never addressed, it continued to a smaller degree after the cast was off and then resurfaced some 40 years later in the form of severe hip stiffness and imbalance. Of course, working with a movement pattern that’s been around for 40 years is much harder and takes much more effort.

It is truly amazing how many physical aches and pains can be helped by troubleshooting habitual movement patterns. As yoga teachers we get to play detective and try to figure out what is causing or contributing to the problem. It also encourages our students to become aware of how they use their bodies on a daily basis. A thorough investigation of the student’s habitual movement patterns needs to be an essential part of any therapeutic yoga work.

What kind of trouble-making movement patterns did you come across?