The last time I went to visit my mom, she asked me to show her some yoga moves because she wasn’t feeling too well. Once we got down to the floor, I asked her to take few full deep breaths. She could barely inhale for two seconds and exhale for two seconds. This immediately sent alarm bells through my brain, since I’ve never seen anybody breathe in such a shallow way. It felt very, very wrong. My mom passed away three months later. This was ten years ago.

The connection between vital lung capacity and mortality has been known for some time now. It was first described scientifically by researchers in the Framingham Heart Study, which has been going on since 1948 and is now considered one of the longest, most important epidemiological studies in medical history. The researchers have made many discoveries over the years regarding risk factors for cardiovascular diseases. In 1983 they published a research paper based on 20 years of biannual follow up of 5209 subjects, that placed vital lung capacity at the top of those risk factors. Vital lung capacity is usually determined by measuring the amount of air that can be forcibly exhaled from your lungs after taking the deepest breath possible. This is called FVC (forced vital capacity).

The researchers wrote: “FVC was strikingly related to the incidence of cardiac failure at all ages and in both sexes. The association persisted even after adjustment for age, cigarette smoking, and hypertension, as well as for other cardiovascular risk factors [height, weight, heart rate and glucose intolerance]. The strong relationship to development of cardiac failure indicates that the simple vital capacity is a sensitive indicator of impaired cardiac function. […] Vital capacity appeared to rank high as a predictor among the major risk factors for cardiovascular morbidity as well as for mortality.”(1)

The researchers were not exactly sure why it was happening but had some interesting ideas: “The explanation for the remarkable association between FVC and cardiovascular morbidity and mortality is at present rather speculative. … There is one intriguing correlation which may provide a clue; the strongest correlation observed for FVC is with handgrip strength. This suggests that the FVC may well be a measure of overall vigor and general strength.”(1) Could it be that our vital lung capacity is indeed an indicator of our overall vitality?

Multiple studies have been conducted since then (see resources below for some examples), and most of them came to similar conclusions. By now it is widely accepted that vital capacity is a reliable predictor of one’s mortality. Forced vital capacity test puts a number to your vital capacity – it shows how much air you can take into your lungs and then actively expel. The ability of your lungs to do that depends on two key factors: lung compliance and lung elasticity. Let’s look at those more closely. 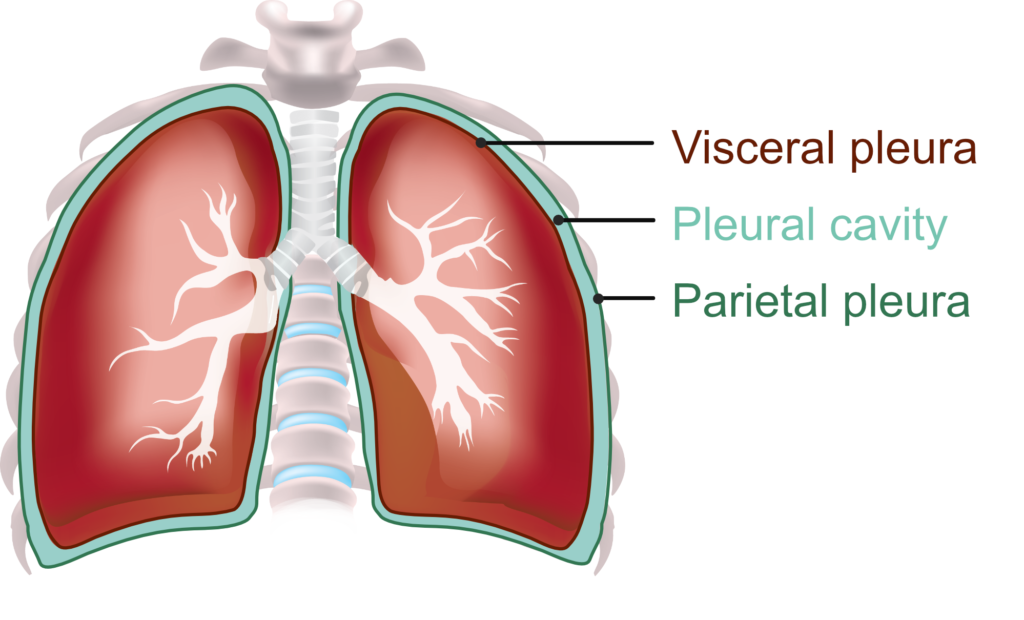 Our lungs don’t have muscular tissue, so we cannot move them at will. Instead, the lungs expand and shrink because of an intricate interplay between pressure and volume within the lungs themselves, the pleural cavity that separates the lungs from the rib cage, and the atmospheric pressure around you. The outer surface of the lungs (visceral pleura) clings to the inner surface of the ribcage (parietal pleura) with a pleural cavity in between. Your rib cage expands on the inhale and pulls on the lungs, which forces them to expand. This is called lung compliancy, the ability of your lungs to be stretched out following the movement of the rib cage. But your lungs also contain elastic fibers, which make them shrink back. When you reach the end of your inhalation, your lungs pull your thoracic cage inward as they recoil. This is called lung elasticity. The outward pull of the rib cage on inhale and inward pull of the lungs on exhale form your breath cycle. Proper lung function depends on the delicate balance between lung compliancy (ability to stretch out) and elasticity (tendency to recoil).

If your lungs lose their compliance (ability to stretch out), taking air in will become very difficult, because your lungs want to shrivel. This happens if the tissue of the lungs becomes very fibrous, like in pulmonary fibrosis.

If your lungs lose their elasticity (ability to recoil), exhalation will become very difficult, since
the lungs are no longer able to recoil naturally without effort. This happens with some respiratory diseases, like emphysema.

Unfortunately, the natural aging process is not kind to our lungs either. It affects your lung function in the following ways:

As a result, it is expected that the lungs will lose 12% of capacity between the age of 30 and 50 and continue a steady decline from there. By age 80 we would usually lose about 30% of our lung capacity. It is not all doom and gloom, however. It doesn’t mean that as we get older, we are destined to go through steady decline in our lung function.

There are specific things we can do in our yoga practice to maintain healthy lung function. To keep proper balance of compliancy and elasticity of the lungs, we need to exercise both (although, depending on your health condition, one might be more important than the other). We support lung compliance by breathing in fully, expanding the ribcage and holding the air in. We support lung elasticity by exhaling fully and holding the air out.

In yoga we work on maintaining and expanding lung compliancy and elasticity by:

Since vital lung capacity is essential to health, it’s worth putting some effort into keeping our lungs healthy and resilient, which, hopefully, can slow down the respiratory decline associated with aging. Next time we will take a look at the diaphragm and explore how our posture effects breathing – tune in!