My grandmother suffered from lower back pain for many years. She described it as sharp, debilitating pain on one side of her lower spine. The only remedy she could find was a heating pad that she regularly applied to the painful area. She was a very active woman who moved a lot, gardened, carried heavy groceries on foot from the store, and did her own home remodeling. But whenever a bout of back pain hit, she would be immobilized for days. This was a common concern in her circle of friends, and nobody had a good remedy for it.

I experienced similar kind of pain during pregnancy. I was terrified – would I have to live with this thing for the rest of my life? Turns out – yes, I would. But I can also manage it pretty successfully, because I know where it’s coming from. When you properly identify the problem, you can eliminate or reduce behaviors that contribute to it, make better choices for how to deal with it, and take appropriate steps for preventing future occurrences.

The pain that both my grandmother and I experienced is actually very common for women, but it is often misunderstood, misdiagnosed and mistreated. Doctors and other health care practitioners often attribute this type of discomfort to a potential herniated disc, or spinal stenosis, or piriformis syndrome, or sciatica, or some other issue. But in reality, it stems from sacroiliac joint dysfunction. 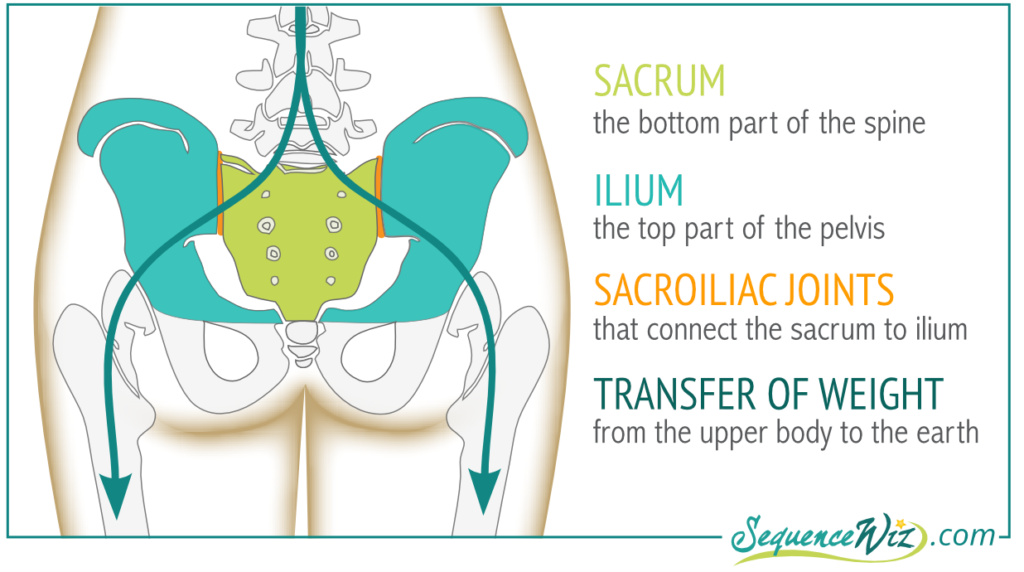 Your sacrum (the lower portion of your spine) fits nicely between the bones of your pelvis and is connected to it via the sacroiliac joints. The entire structure needs to be stable and symmetrical to properly transfer the weight of the structures above (head, ribcage, spine, organs, muscles, etc.) through the sacrum, into the pelvis and then into the earth, both at rest and in motion.

The sacroiliac (SI) ligaments that bind your sacrum to your pelvis and your spine are very strong.

At some point during the 20thcentury the medical community concluded that since those joints were strong, they wouldn’t be prone to spraining or tearing, and therefore, sacroiliac joint dysfunction cannot be the reason for your lower back pain; case closed. Somehow, though, they forgot about the effect that those pesky hormones can have on pliability of the SI ligaments.

Women have a particular hormone to thank (or blame?) for messing up our SI ligaments. This hormone is called relaxin, and it is well-established that this hormone makes SI ligaments more lax during pregnancy for the purpose of accommodating the birthing process. But did you know that women start to produce relaxin when they begin to menstruate? This hormone gets released during each menstrual cycle after ovulation to prepare the uterus for potential pregnancy. If pregnancy does not occur, the level of relaxin drops, only for the entire cycle to be repeated again the following month. That is why it is not surprising that you might experience more pain and instability in your sacrum as your period approaches. This means that any woman of reproductive age is at higher risk of sacroiliac dysfunction.

If you do become pregnant, during the third trimester your center of gravity shifts forward, which adds additional pull on your SI ligaments. After child birth there is no guarantee that those ligaments will return to their former length, shape or symmetry. And if the mom begins to carry her baby on one hip, haul a heavy car seat around, sleep in weird positions, and do other asymmetrical activities, how will her sacroiliac ligaments ever return to their former glory?

Even when you move past your reproductive years, you are still not off the hook. In women over 50 the surface of the SI joints can become rough and cause discomfort with asymmetrical activity.  Oh the joys of being a woman! 🙂

However, asymmetrical activity can be problematic not just for women over 50. Just like any other part of the body, SI ligaments adapt to the load we put on them. If that load is perpetually asymmetrical, it will have an impact on the symmetry of your ligaments. 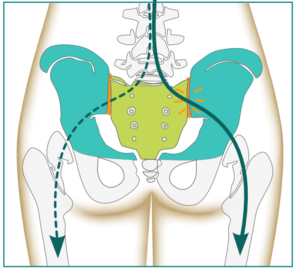 This happens if you sit with one hip slightly forward or up while driving, or constantly carry heavy loads on one side of your body, or push heavy objects (like gurneys, or construction materials, or furniture) while leveraging yourself with one foot, and so on. Those types of activities abound in our daily lives and in many occupations. When sacroiliac ligaments become uneven, they have trouble maintaining a proper relationship between the sacrum and the pelvis. As a result, the sacrum no longer distributes the weight of the upper body evenly through both sacroiliac joints, which creates strain on one side and can lead to sharp pain that might resonate into the lower back, buttock or thigh. SI joints can also get injured in an awkward fall or while playing sports.

To summarize, sacroiliac joint dysfunction can affect both women and men, but women generally are at higher risk because of hormonal changes their bodies go through. What can we do about it? After all, we do not have control over our hormones or some actions that are required for our occupations. But there are definitely things we can and should do to keep our sacroiliac joints less moody. We will talk about those strategies next time – tune in!