You don’t need to be a scientist to know that sound (music and singing) has a profound effect on the way we feel, often in a predictable way. For example, you probably won’t fall asleep when you listen to a marching band, nor would you jump wildly around the room when you listen to a lullaby. Yet the exact mechanism of how and why sound affects us in certain ways is not exactly clear (although there are many theories).

We know that the ear transmits energy from sound waves. Sound travels through the inner ear as vibrational energy until it reaches the cells of Corti (a receptor organ deep in the ear) where it becomes an electrical nerve message that travels from these cells along the 8th cranial nerve to the cortex of the brain for final interpretation of the sound.

In fact, the ear has been called “the Rome of the body” (as in “All roads lead to Rome”) because of the fact that almost all cranial nerves lead to the ear, including the vagus nerve. “Let us track the path of the vagus throughout the body. The nerve wanders on from its liaison with the ear, next making contact with back muscles; it then sensitizes the larynx which allows us to speak, sing, or scream. The vagus then travels to the lungs and heart before diving through the diaphragm to innervate all of our internal organs (including the entire intestinal tract via communication with sacral nerves). Hearing has substantial effects on the rest of the body due to its contact with the vagus nerve.” (1) Just think of the suspenseful soundtrack in the last thriller you watched – do you remember how it affected your breathing and heart rate?

One theory that explains the effect that sound has on our physiology was proposed by French otolaryngologist Alfred A. Tomatis. He believed that the primary function of the ear is to provide the cells of the body with electrical stimulation or cortical charge. 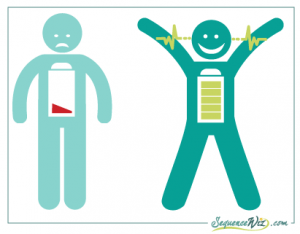 He believed that once the nervous impulses generated by the cells of Corti reach the brain, they get distributed throughout the body “toning up the whole system and imparting greater dynamism to the human being” (Tomatis. 1978). He didn’t say specifically that the distribution happens through the vagus nerve, but it seems likely. He stated that different sounds have different effects on cortical charge. The cells of Corti respond much more intensely to high-frequency sound than to low-frequency sound. He calls sounds rich in high harmonics “charging sounds,” in contrast to sounds rich in lower tones, which he calls “dis-charging sounds.”

Dr. Tomatis used those principles in his high-frequency sound therapy and claimed that “charging sounds” manifested in increased motivation and competence in work, better concentration, increased memory skills, lower susceptibility to fatigue, and generally more dynamism and energy (Tomatis, 1978). In his clinical practice, he claimed to have successfully treated a wide range of illnesses including hearing and voice loss, stuttering, ringing in the ears, depression, attention deficit disorder, hyperactivity, dyslexia, inability to concentrate, and a variety of balance/coordination disorders related to problems with the inner ear.

The traditional medical establishment in France always considered Tomatis’ sound therapy an alternative medicine and didn’t endorse it. However, the latest studies confirm some of his findings. For example, one study suggests that the Tomatis Method has positive effects in children with ADD. “Results revealed statistically significant improvements for the Tomatis when compared to the non-Tomatis group: the experimental group showed significant improvement in processing speed, phonological awareness, phonemic decoding efficiency when reading, behavior, and auditory attention.” (2)

Regardless of what one might think of Dr. Tomatis’ methodology, his theory of the charging and discharging sounds strongly correlates with the brhmana/ langhana idea that is important in both yogic and Ayurvedic traditions. The Brhmana / Langhana model states that there are two kinds of practices: those that nourish and build the system (brhmana, also spelled brmhana) and those that reduce or eliminate from the system (langhana). So you choose one or the other depending on what it is you are trying to accomplish. If you got too much of a certain kind of energy (anxiety, agitation, anger, etc.) or got too little (low energy, low self-esteem, depression, etc), it will be harder for you to find the state of internal equilibrium. So what do you do? You get rid of the excess and build on deficiencies!

There are certain kinds of practices in yoga that have a pronounced langhana effect and others that have more brhmana effect. Sound has traditionally been an essential component of the yoga practice. When it comes to sound, two qualities define whether it will have a brhmana or langhana effect – svara (pitch) and balam (strength).

Balam: The stronger the sound (including volume), the more brhmana effect it will have. Softer sounds have more langhana effect.

It might be tempting to equate the brhmana/langhana model to sympathetic/parasympathetic activation, but they are not exactly the same. The biggest difference worth noting is that the brhmana state does not mean “fight-or-flight mode”, but more of a “refreshed-and-awakened” mode. That is why chanting is widely used in many spiritual traditions as a way to stay present, focused, and energized. Next, let’s talk about the effect that making sounds has on your physiology >