Although those days of newborn parenting now seem like a blur, I still remember myself fluctuating between the states of total numbness from exhaustion, frenetic mobilization to get anything done, and peaceful happy feelings of pure love. Turns out, we reliably travel between those states on a regular basis, both within the space of one day, and throughout our lives, and we have our autonomic nervous system to thank for that.

Your autonomic nervous system (ANS) is concerned with your survival during the times of danger and thriving during the times of safety. It is constantly evaluating your external and internal environment for signs of danger and jumps to your defense before those signs even rise to the level of your conscious awareness. Even though we usually think of two branches of the ANS as the main driving forces that regulate your homeostasis and inner balance, there is a theory that suggests that there are actually three neurological pathways built into us that drive our physiological reactions.

The autonomic nervous system is made up of two branches: the sympathetic and the parasympathetic. The sympathetic branch is a bundle of nerves that is found in the middle of the spinal cord – those nerves connect to every major organ and initiate the fight-and-flight response throughout your entire system (dilating pupils, speeding up the heart rate and breathing, secreting adrenaline, and so on). We usually think of our sympathetic system as a gas pedal that gets you going. The parasympathetic branch is usually associated with rest-and-digest response and is essentially made up of the fascinating vagus nerve. It is usually described as a counterbalance to the fight-or-flight response that brings you back to the state of equilibrium. We usually think of it as a foot break that you press when you need to slow down and regroup. 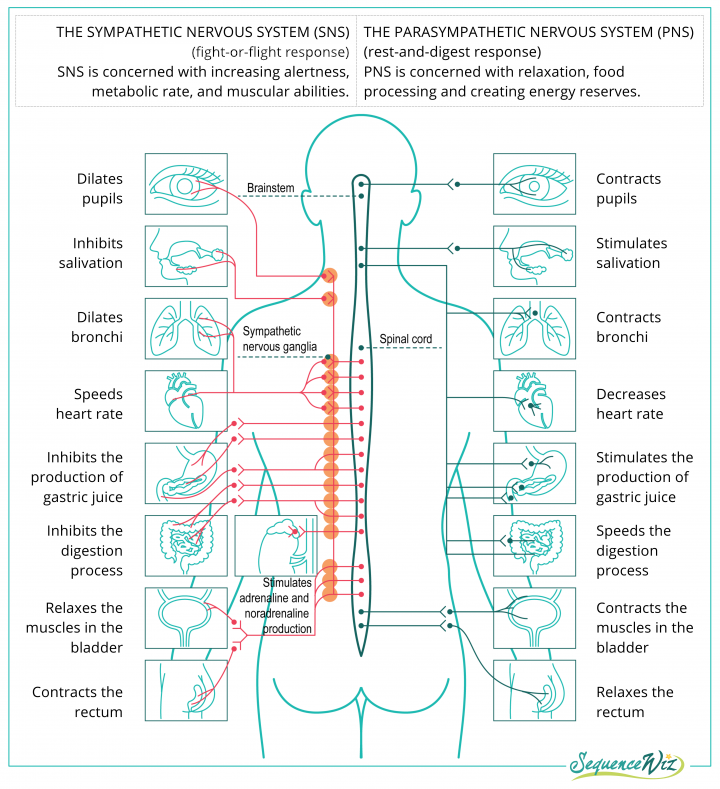 However, the Polyvagal Theory pioneered by Dr. Porges takes it one step further. It looks at the entire autonomic nervous system through the lens of our essential needs for safety and connection to other human beings. The Polyvagal Theory stipulates that there are actually two kind of “brakes” we have built into our systems – a regular “foot brake”, and an “emergency brake”, and both of those brakes get activated by the vagus nerve under different conditions.

The vagus nerve is divided into two distinctive pathways that serve two very different functions. Those two branches of the nerve travel together from the brainstem and split at the level of the diaphragm: the dorsal vagus travels downward and affects the organs underneath the diaphragm, especially those regulating digestion, and the ventral vagus travels upwards and influences the heart rate and breathing rate, as well as regulates connections with facial nerves. Deb A. Dana in her book “The Polyvagal Theory in Therapy” writes that because of these unique pathways, “each autonomic state brings a characteristic range of responses though its own pattern of protection and connection”.(1) 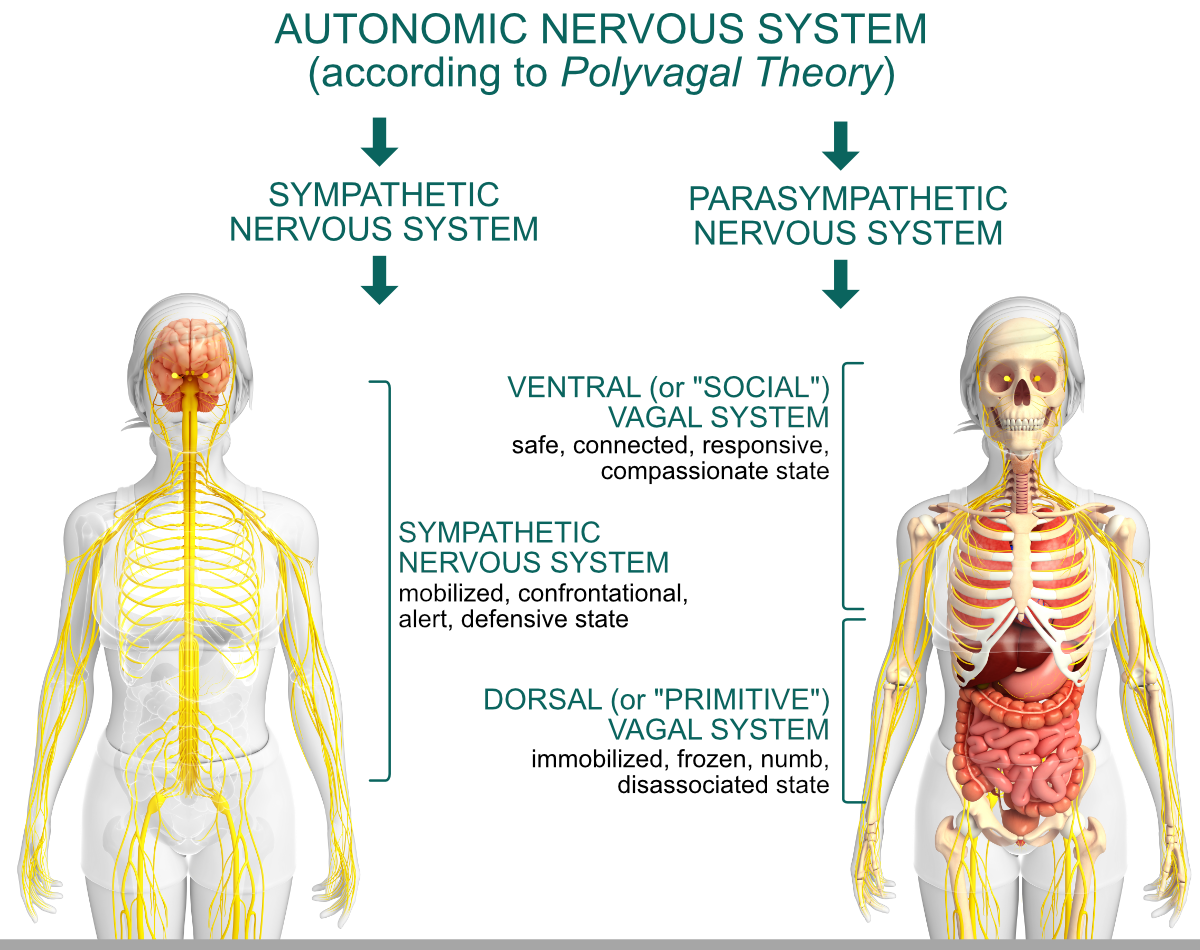 Dorsal (or “primitive”) vagus activation (emergency brake) stops you dead in your tracks and makes you feel frozen, numb, or “not here”. Your system is drained and your energetic resources are being conserved through collapse and total shutdown. This happens when there is a major trauma or life threat (and in the aftermath of those), and when you feel completely exhausted or lost. This can be a consequence of illness, injury or medical procedure on any organ below the diaphragm; it can manifest through impaired immune function, a chronic lack of energy, digestive issues, depression and general withdrawal from social connection. This is a hypoaroused state (in yoga we would call it a tamasic state).

The sympathetic system (gas pedal) gets activated when you need to take action. You are still searching for protection and safety, but in this state, you do it through mobilization of your resources. Your entire body is on high alert and ready for action, which also means that you see, hear and sense danger everywhere. When you are in the sympathetic state, you are more likely to initiate confrontation, to misread facial clues and less likely to connect to other people. This state can manifest as frenetic movement, busyness, fidgeting, and overall defensiveness. This is a hyperaroused state (in yoga we would call it a rajasic state).

Ventral (or “social”) vagus activation (foot brake) encourages you to slow down and puts you in the state of safety and connection. Deb A. Dana writes: “In the ventral vagal state, we have access to a range of responses including calm, happy, meditative, engaged, attentive, active, interested, excited, passionate, alert, ready, relaxed, savoring, and joyful.”(1) In this state you are most open to connection with others, the world seems like a welcoming place full of possibility, and you are able to feel compassion both toward yourself and others. “In the ventral vagal state, hope arises and change happens.”(1) In this state, you feel safe and open to social connection (in yoga we would call it a sattvic state).

This theory closely reflects the yogic idea of the three gunas (tamas, rajas and sattvas), and demonstrates how gunas are reflected in your autonomic nervous system. Your autonomic nervous system is a foundation upon which your entire lived experience is built. Most of us move through those three states throughout the day in response to the sensations within the body and signals from the environment. Do we move through those states in a particular order? What impacts that transition? Do we have any conscious control over it? And what does it have to do with teaching yoga? We will discuss all those questions next time. Tune in!