A few years ago I got hooked on this show called “Lie to me”. The main character of the story, Cal Lightman, is portrayed as the world’s leading expert on facial expression and body language. Cal uses his skills to read people’s emotional responses during conversations and questioning, which helps him catch criminals and solve mysteries.

The most interesting thing was that, while a work of fiction, this show was loosely based on the life and work of a real person – American psychologist Paul Ekman. Dr. Ekman is recognized as one of today’s most influential psychologists of today mostly for his studies of emotions and their relation to facial expressions. He conducted multiple studies around the world, including in the most remote locations, and concluded that facial expressions are universal – they are expressed and recognized universally around the world. He postulated that emotions show up on people’s faces via the contraction of certain specific muscles and broadcast to the world whenever we feel anger, fear, sadness, happiness or disgust. In fact, he states, it works both ways – if you contract those same facial muscles on purpose, you will make yourself feel the corresponding emotion. His work builds on Charles Darwin’s book The Expression of the Emotions in Man and Animals, where he stated that both emotions and their expressions are part of universal human nature. Those ideas had become dominant in the studies of emotion and can be now referred to as “classical” view of emotion.

Now let’s conduct a little experiment. According to the “classical” view of emotions the image of the woman on the right would be described as “woman screaming in fear.” Can you see it for yourself?

If I asked you to select from a list of emotions below to describe this image, which one would you choose?

It seems pretty straightforward. Now let me give you a little context. Click here to see the entire image and where it was taken. Does that change the emotion that you would assign to it? Do you also see how I “primed” your perception of that image by giving it a description ahead of time and narrowing your choices?

This is where it gets tricky – we do not perceive facial expressions in isolation, but in context. Our perception is also impacted by what we expect the emotion to be. And, of course it is dependent on our own experiences of that emotion in the past, the range of expressions that we identify with that emotion, and many other factors.

OK, fine, you say, so emotions look different on people’s faces; but it doesn’t mean that we experience them differently. Actually, we do. Multiple studies were conducted in attempts to identify specific physiological responses associated with specific emotional states, and it turns out that there is no physiological consistency either when it comes to emotions. For example, when you are feeling angry your blood pressure can go up, or down, or stay the same; you might feel an increased heartbeat, or not; your hands might become sweaty or dry, and so on – there is endless variation to how you might experience anger from one occasion to another. “On different occasions, in different contexts, in different studies, within the same individual and across different individuals, the same emotional category involves different bodily responses.” (#1, p.15)

Well, at least, you say, we know that specific areas of the brain are responsible for specific emotions! For example, we’ve been hearing for decades that the amygdala is the seat of fear. Turns out that the brain has multiple ways of creating fear, and amygdala becomes activated in other instances as well, for example when you encounter something novel. “Brain regions like the amygdala are routinely important to emotion, but they are neither necessary nor sufficient for emotion” and “many combinations of neurons can produce the same outcome.” (#1, p. 18)

All this means that when it comes to emotions, variation is the norm. We do not experience emotions the same way, we do not display them in the same way and we do not have specific brain areas that produce them. Furthermore, the studies show that “emotions arise from firing neurons, but no neurons are exclusively dedicated to emotion.” (#1, p. 21) This means that emotions are not distinctly different from other mental events, like cognitions and perceptions. (#1, p.34)

It’s interesting that ancient texts like Patanjali’s Yoga Sutras take the same route – Patanjali does not differentiate between emotions and perceptions. He puts it all together into the category of “mental fluctuations” or “mental disturbances” and describes it with a word “vrtti” which also means “to rotate” (as in Jathara Parivrtti pose, for example) and has a connotation of a vortex. According to the yoga sutras, the sole purpose of yoga is to tame the vortex of mental fluctuations, which includes our perceptions, cognitions, emotions and all other mental activities. Otherwise, say the sutras, you will continue to define yourself through your mental activity (including emotions). 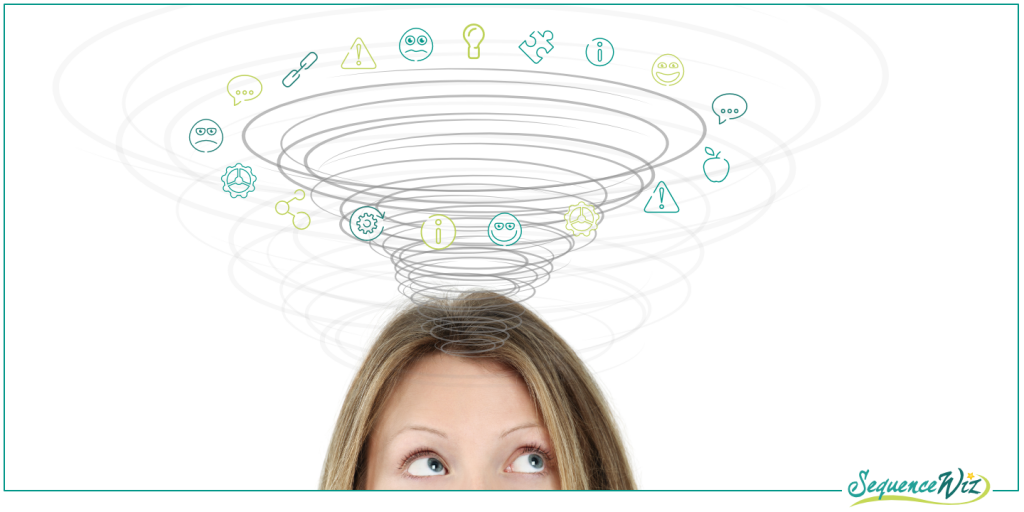 It appears that both modern neuroscience and the yoga sutras agree that emotions are not spontaneous reactions to the world arising from somewhere deep within, but they are mental constructs that you create, and they define and shape your reality.

How does this work? We will discuss it next time. Tune in!