I saw this movie a decade or so ago called “What the bleep do we know?!” It gave a simple and down-to-earth introduction to the confusing world of quantum physics. One of the scientists interviewed for the movie was asked: “So hypothetically – can you walk on water?” To which the scientist replied: “Yes you can, if you truly believe it.” The entire movie is really about the power of belief to shape our reality, and make no mistake – we do it all day every day.

The way we view the world and interact with it is based on our deeply held beliefs about ourselves and about reality itself. Those beliefs can drive us forward or hold us back, strengthen or ruin relationships, enrich our lives or make them miserable. If something is not working in your life, it might be useful to examine the governing beliefs that are shaping your reality. This can be rather hard, since those beliefs are very deep and quite tangled. But don’t worry; as with everything else, the yoga tradition has a map for you to follow.

But before we get to that, let’s figure out what a belief is and where it comes from.

“A belief is a story in your head, a cause-and-effect chain, like a recipe or rule for action. The basic recipe looks like this: If you have a need, then look for a belief that provides a rule for action to get the result you want.”(1) If you feel lonely (need), then seek company (belief). If you follow this belief, go hang out with a friend (action) and feel less lonely (result), then your belief has been validated.

We all have a variety of needs; the most famous map of those is Maslow’s hierarchy of needs. In 1943 Abraham Maslow proposed “A Theory of Human Motivation”, where he attempted to explain why we (humans) do the things that we do. He suggested that human beings are arranged like a ladder, with certain needs defining every step of it. You would need to fulfill the needs of each step to be able to climb onto the next one.

Later on, the strict hierarchy of those needs was challenged. If you are hungry, it is hard to focus on self-actualization, but it is possible. So now it is accepted that the order of those needs can vary from culture to culture, from person to person, and can depend on circumstance, or your age. Ultimately, at any given time you have more urgent needs and these are the ones you pay most attention to.

When you are little, your needs are very basic and based on how those needs are met, you form beliefs about them. As we get older and gain more and more experience, our brains consistently organize and store information on what it takes to fulfill our needs. It becomes a learning loop. 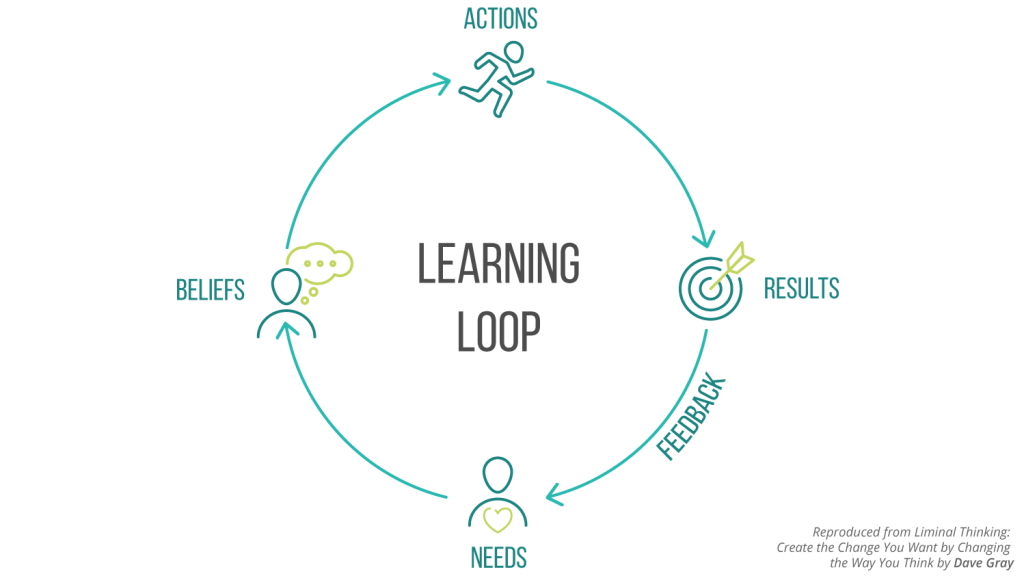 “I want to feel warm outside (need), so I put on a coat (belief)”. You put on a coat (action) and feel warm (result), which confirms your belief (feedback). By running those feedback loops, we reinforce our beliefs.

We can form all sorts of beliefs that can be useful or not useful. When we are young we test different sorts of beliefs to see what would work best. A typical example – a child’s screaming fit at a grocery store. “I want this piece of candy (need), and I can get it by crying and screaming (belief).” So the kid starts to have a fit (action) and if the parent gives in and buys that candy (result), the kid gets the message “That worked, I will do it again next time” (the belief has been confirmed).

As we become older, we gain more experience through trial and error and our beliefs gradually become more rigid. We stop testing them. “Over time, these beliefs and actions become deeply embedded habits and routines: a complex, dense, interconnected system of beliefs and behavior that is not easy to untangle and understand. The more we reinforce those habits and routines, the more invisible they become, until one day they are just “the way it is.”(1)

This can become problematic when it concerns our governing beliefs that are closely tied to our identity. Those are the beliefs that are connected to our deepest needs and define who we are, basically forming the basis of our personality. 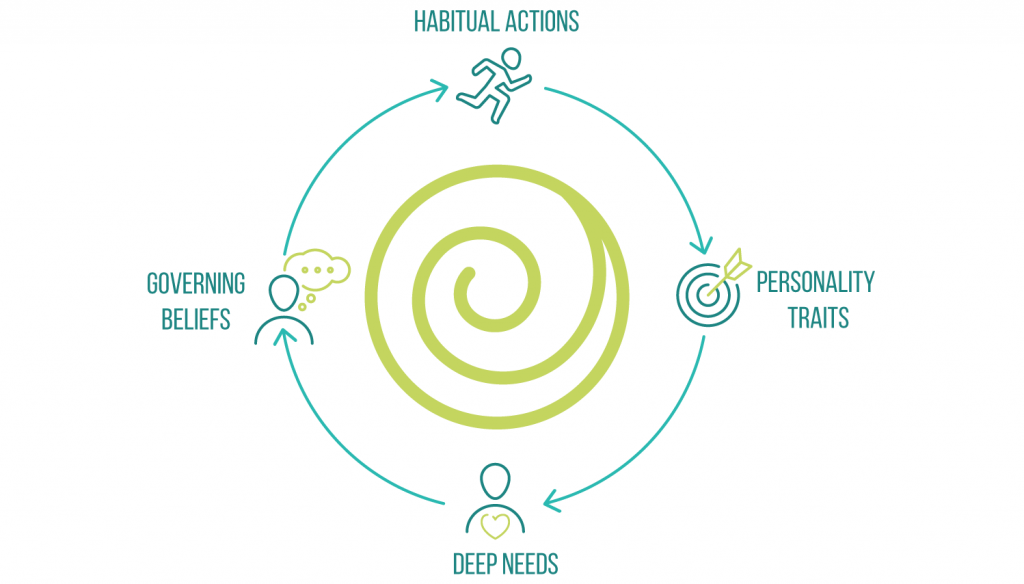 The yoga tradition has mapped out those deepest needs and the concentration of beliefs around them as symbolic energetic centers in the Chakra model. The Chakra model is sometimes called the map of personality because it helps us identify our deepest needs and potentially the governing beliefs associated with them. Far from being “woo-woo” and “out there”, chakra work involves concrete steps that we can take to examine our beliefs and try to replace the dysfunctional ones with the ones that would serve us better.

Over the next few weeks we will take a closer look at the chakras and how we can use them to untangle the web of our deeply held beliefs. Tune in!