In Pixar’s movie Inside Out there is a scene where two characters travel on a “train of thought” and accidentally bump into two boxes spilling their contents on the floor. One had “facts” in it, and another had “opinions”. “This always happens to me! – cries one of the characters, – I always get those mixed up!”

Well, this happens to all of us all the time. We tend to confuse “facts,” that are concrete realities, with “opinions,” that are interpretations of those realities. An opinion is just the brain’s best guess about what’s going on based on past experience and current beliefs. An opinion often leads to an emotional response, which can be productive or destructive to our health and well-being.

Can we control those emotional responses? Research conducted by Kevin Ochsner at Columbia state University shows that “conscious control over the limbic system is possible, not by suppressing a feeling, but rather by changing the interpretation that creates the feeling in the first place.” (1) So to change an emotional response we need to go back to the opinion that provoked it. If we change how we interpret the reality, we will change the emotions that show up.

Changing your interpretation of reality doesn’t mean making stuff up; it just means emphasizing a different aspect of reality. For example, it is fall here in the United States (that’s a fact) and some folks might be disheartened by it.

Other people might rejoice in this fact and have a totally different response because they look at it from a different angle. 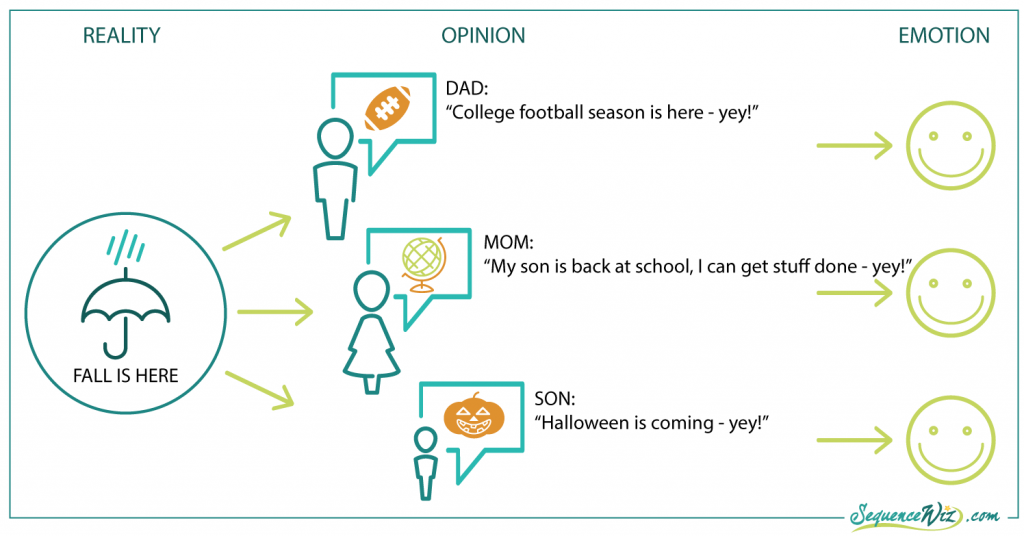 Learning to switch your perception of the situation on demand is called “cognitive reappraisal” (or pratipaksha bhavana in yoga) and it is a great tool for emotional regulation. David Rock in his book “Your Brain at work” defines four types of cognitive reappraisal. Some of those you already do automatically, and some require a bit more conscious effort. Here is what you can do to change your emotional responses:

This is fairly easy to do about situations that you are not particularly invested in. You see a guy stomping his feet on the street and you think he is angry or crazy and you should stay away. Then he smiles at you and shakes off some dirt from his shoe and you reinterpret him as a friendly guy who is trying to get the dirt of his shoe. The brain does this automatically as it receives new information. You can also do it intentionally if you accept that there might be aspects of the situation that you are not aware of, and be willing to revise your opinions once you receive new information.

Anything new and uncertain is frightening to the brain. So whenever you meet a new client, start a new project, face a new challenge your reaction might range from slightly uncomfortable to a full-blown panic. Usually just recognizing that you are having this reaction because you are dealing with something new can help diminish the stress response significantly. ”Having an explanation for an experience reduces uncertainty and increases a perception of control.“(1) Once you become more familiar with the situation and develop strategies for handling it, it will become “normalized”.

Your brain stores all information as a complex map of the world. It is arranged as a hierarchy in order of importance to you. Simply deciding that something is not important and not worth your time and mental effort rearranges your mental map and changes how you view the situation. “Reordering how you value the world changes the hierarchical structure of how your brain stores information, which changes how your brain interacts with the world.”(1) You can decide to deal with important things and not sweat the unimportant stuff.

4. Reposition, or find a new perspective from which to interpret the situation

This is the most challenging type of reappraisal, because the older we get the more opinionated we become, and more set in our ways. Our view becomes the only rational and common sense approach. Yet there are as many points of view as there are people. If you take on another person’s perspective, you are changing the context through which you view the situation. This is useful not only for interactions that involve two people, but for any challenge that you might be dealing with. What would your mom say about it? What would Buddha say? You can try to view the situation from another person’s perspective, or from the perspective of another culture, or even from your own standpoint at a different time in your life.

These are some of the tricks that you can try when you are dealing with a challenge in your life. Is there a way to look at it differently? Can you reframe it in a way that doesn’t cause you suffering? Yoga sutra 2.16 says ”Unnecessary suffering must be avoided.” Oftentimes suffering comes from our own perceptions. It is those rigid perceptions that prevent us from seeing the world for what it is, which is neither good nor bad. Consistently practicing pratipaksha bhavana (or cognitive reappraisal) helps us see that there are many ways to look at the same situation, and we have a say in which ones we choose.

The yoga tradition says that we all look at the world through a clouded and colored lens that contains our past experiences and current beliefs. Ultimately via practicing yoga we are trying to purify that lens, so that “it becomes like a transparent crystal, able to reflect clearly the object of perception, the perceiver and the act of perceiving. “ (Sutra 1.41) That is a pretty tall order, but the ability to reframe our view of the situation on demand is a giant step toward it.

Next week we will feature a full-length yoga practice that facilitates cognitive reappraisal. Tune in!