In the Beginning was the Word

I was an experienced, professional writer when I began practicing yoga. In those days, it never occurred to me that yoga and writing could be mutually supportive practices. That discovery came later, after yoga helped me through a significant writing crisis.

I began identifying as a writer in grade school, and felt a pull towards the written word, reading, and writing from well before I could actually make out what black marks on white paper meant.

In school, I loved grammar and could lose myself for hours diagramming sentences. Reading was passion and refuge. Writing, however, was daring and hard. Even as I became a more experienced writer, a final “product” might have read well and been praised, but getting there was often full of promising starts, painful, unexpected stops or long pauses, and terrifying stretches of blank abysmal silence.

And yet the pull to write remained.

These experiences plagued me all through school, and later when I started writing professionally. The only time this didn’t seem to be the case was when I journaled or at other seemingly random times that my literary studies led me to believe were moments of inspiration over which I had little or no control because they were somehow divinely conferred. Yet, the pull kept me writing. At some point I became aware of an inexplicable faith that the world that opened when I journaled or at other random times wasn’t some Brigadoon over which I had no control entering or leaving. Not knowing what to do with that awareness, I tucked it away and kept writing, honing technical skills, if not ease, style, and fluidity.

I learned many things about the technical aspects of writing along the way, enough for me to help student writers work toward mastering writing mechanics. Working with these students both in the classroom and especially one-on-one, I observed some of the same obstacles I experienced. I tucked away these observations.

Meanwhile, I kept at my own work—primarily fiction and poetry. The pull to write kept taking me in directions that intrigued me, but that I didn’t fully understand. I wasn’t writing like other people were writing, stylistically or in subject-matter. 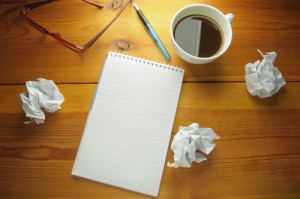 It became harder to finish pieces, navigate the ideas and images that came to me and know where to take them or know to put them away to gestate for a while. I grew increasingly impatient and frustrated with writing. Worse, I began losing faith in it. The loss of faith wound up spreading to everything I wrote, including journal entries. One day, my faith shattered, leaving a litter of writing shards and the dust of language drifting in the wind. Language became enervated and sterile, writing meaningless, whether mine or another’s. Then I did the previously unthinkable: I gave up writing.

Then one day I found yoga practice. The pull I had felt for language and writing shifted to yoga and I started to practice regularly. I knew nothing about the yoga that I was doing, which was mostly posture practice, only that it left me feeling better overall and cautiously hopeful that I would find meaning and purpose once again.

I kept going to classes and connected with a teacher who used to be a language arts teacher for middle schoolers. Eventually, I took her seven-month yoga intensive program. Her guided meditations were an invitation to healing.

In the middle of this intensive, a poem arrived—unbidden. It rose in response to a poem we were asked to read in a lesson on the essence of being and the experience of that essence—the very heart of yoga. With the arrival of that poem, the schism with language, writing, and being started to mend. Yoga had something to do with it, but so did the act of writing.

The experience aroused my curiosity and along with it a budding intuition that I must pursue deeper yoga study and practice and return to writing. A new pull also revealed itself: to find a way to bring these two practices together, to show how these two practices work synergistically towards the same end—liberation from suffering and the causes of suffering.

Read the second part of Aggie’s post next Friday!

Aggie Stewart is certified through the American Viniyoga Institute as a yoga teacher at the 500-hour level (2009) and a yoga therapist (2011). She sees it as no small irony that she fell in love with language of poetry at age 15 while reading Macbeth in the vestibule of a church. Her love of yoga in the lineage of Krishnamacharya followed decades later when she met her teacher, Gary Kraftsow. She is currently working on a book-length treatment of the Yoga of writing, intending to bring the insights she’s gleaned through both her experience and that of her students to a broader audience.