When I was little, I did gymnastics, and deep back bends like this one were easy for me. It didn’t happen because I was particularly accomplished; my spine just went there without much resistance. Some spines do, and some spines don’t. Because of that, the challenges that the practitioners face are different. Those who have a lot of mobility in their spines will need to develop stability in their yoga practice; and those who have a lot of stability can always improve on flexibility, but they probably will never be able to do things that super bendy people do – and this is perfectly fine.

You are probably pretty clear by now which camp you belong to, but does your yoga practice reflect that knowledge? It’s easier to fall into patterns that are familiar to the body – for bendy people to push further into back bends, and for not-so-bendy people to give up on back bends altogether. Either one is a disservice to the body. Today we will talk about developing stability while bending back (which is important for everyone) and increasing range of motion of the spine (for those who need it, and I don’t mean folks like that – ouch!) 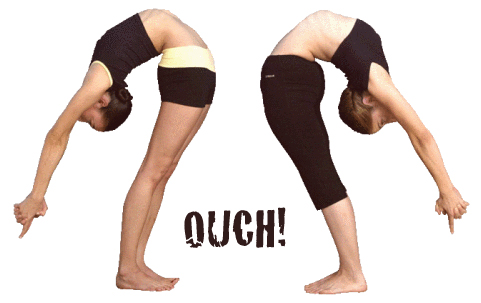 The biggest problem for most people in back bends is creating a pivot point, which means that most of the bend will be happening in one location, stressing it significantly. Can you identify the pivot points in those two poses?

Exactly, the lower back is taking on the entire load, often at the L4-L5 junction (a place between last two lumbar vertebrae), which is the most mobile and the most weight-bearing. L5-S1 connection (where the lumbar spine connects to the sacrum) is often compromised as well. I read a quote from a spinal surgeon somewhere – he said that L4-L5 junction had bought him a nice house and put his son through college. Many people experience problems in this area. I don’t know about you, but I don’t feel like sponsoring this guy’s Porsche, so I choose to take care of my spine.

So instead of bending at a pivot point, we need to focus on distributing the curve throughout the spine. We do that by 1. Focusing on lengthening the spine, instead of bending back, and 2. By creating a strong abdominal contraction when we exhale in the pose and MAINTAINING IT ON THE INHALATION.

Let’s use an example of the Warrior pose to analyze those points. In the first image the emphasis is placed on deepening the curve of the spine. As a result, the body is compromised in a number of key areas. 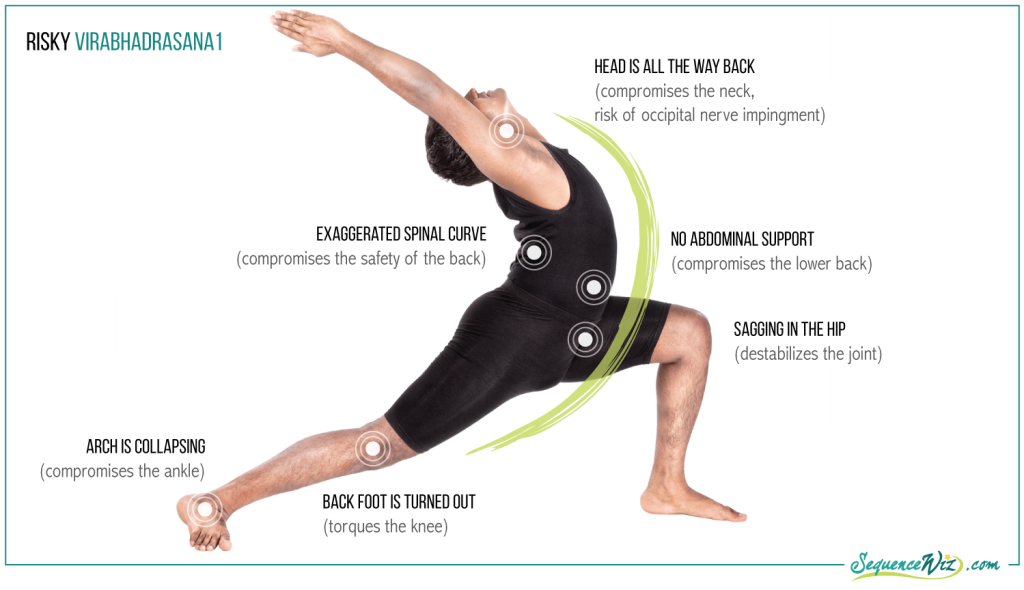 In the second image, the curve isn’t nearly as deep, but the emphasis is placed on LIFTING THE CHEST AWAY FROM THE NAVEL. That way you get the benefits of both strengthening the back and stretching the front of the body. 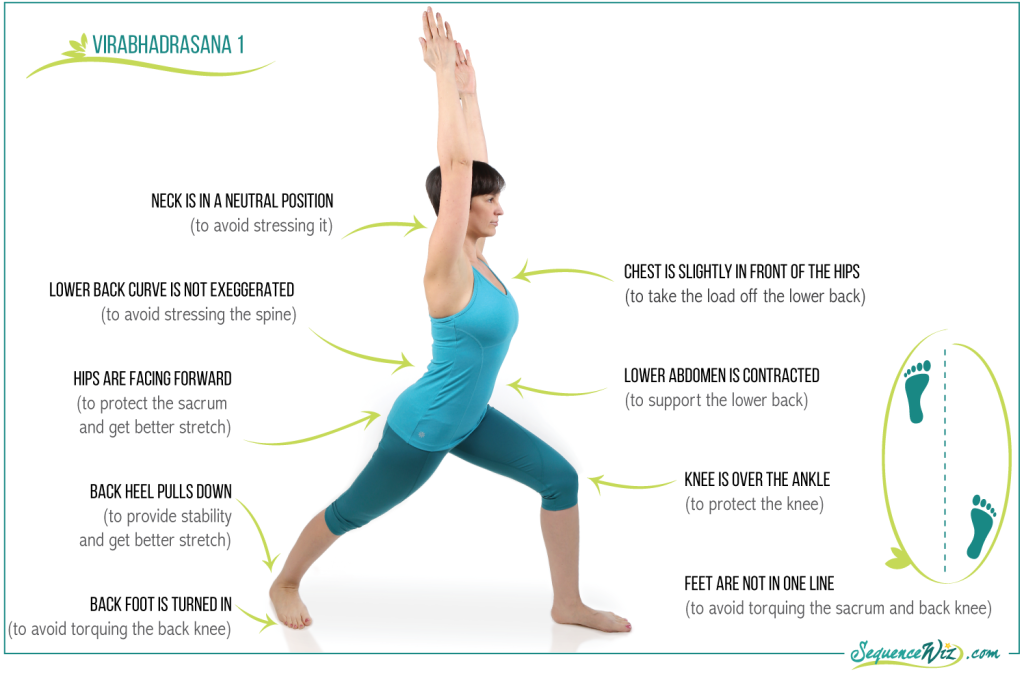 When we bend back, the most important thing is to create an abdominal contraction to support the lower back. Otherwise we end up collapsing into the lower back and stressing the spine at those vulnerable L4-L5 and L5-S1 junctions. Here is how to do it. 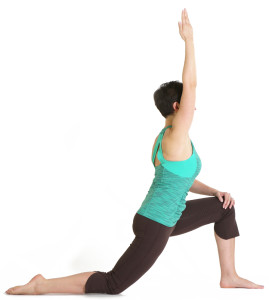 INHALE: Move into the pose, making sure that the chest ends up slightly in front of the hips.

EXHALE: Gradually contract the abdomen from the pubic bone toward the navel.

INHALE: Lift the chest forward and up, away from the hips WHILE MAINTAINING a partial abdominal contraction (the lower part of the abdomen will remain contracted).

EXHALE: Reengage the abdomen from the bottom to the top, keeping the lower body stable and grounded.

Continue to breathe like that, emphasizing the length of the spine on the inhale and abdominal support on the exhale.

In addition to bending at the pivot point and lack of abdominal support, we might encounter few other issues while attempting back bends that might strain the student’s body. Here are few examples: 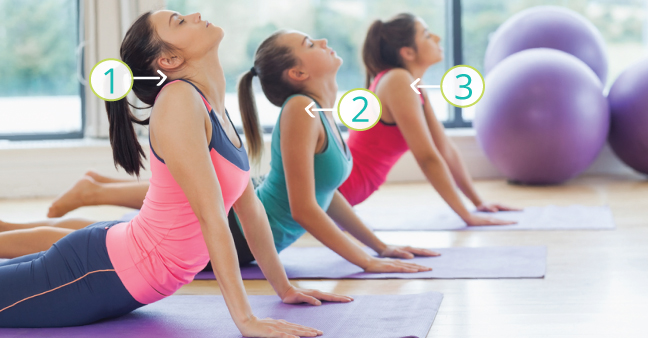 1. Collapsing the neck backward is problematic because it creates tension on the back of the neck and has potential to compress or irritate the occipital nerves. Those are the nerves that run from the base of the neck up through the scalp. Trauma to the occipital nerves is often caused by an auto accident where the head impacts the headrest; we don’t want to recreate a similar situation in our yoga practice. Nerve impingement can lead to headaches, pain and burning at the back of the neck. Also, when you move your head back beyond the point of just looking up, you can put pressure on the vertebral arteries and with that reduce the blood flow to the brain. The situation gets worse if the arteries are clogged. The result – dizziness, maybe even loss of consciousness.

2. Shrugging the shoulders toward the ears is a common response to stress, lack of movement and computer work (read ”modern lifestyle”). It becomes even more pronounced when we ask the arms to bear weight (like in upward-facing dog pose). This can lead to neck and shoulder tension and stress on the shoulder joints.

INSTEAD: Focus on widening the collarbones and pulling the shoulder blades in and down, which will help with proper shoulder positioning.

Back bends can be invigorating, back-strengthening and heart-opening, as long as we don’t sacrifice the safety of other body parts.

Back bends are excellent for both strengthening the body and manifesting different ideas within a yoga practice (like openness, vulnerability, receptivity, etc.) Check out this post that takes a closer look at Virabhadrasana 1 and shows what makes this pose so special and multidimensional.

Tags: backbends in yogayoga for your backsafer back bends