Have you ever heard of the “honeymoon nose”? The proper name for it is honeymoon rhinitis and it reflects the phenomenon that your nose feels congested after prolonged sexual stimulation. It turns out that your nose is lined up with the same kind of erectile tissue as your genitals and those tissues become swollen when you get excited. 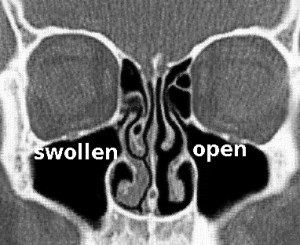 That is not the only time when those tissues in the nose get swollen. In fact, there is a predictable pattern of swelling and shrinkage that was first described (scientifically) by the German physician Richard Kayser in 1895. He had observed periodic cycles of congestion and decongestion that alternated between the right and left nostril, which was later termed “nasal cycle”. This phenomenon is widely known in the scientific community and has been subject to multiple studies. The funny thing is that yogis had known about it for hundreds of years and used it effectively to change the body’s temperature and one’s mental state, but we’ll get to that later.

Here is what science confirmed so far:

Most organs in the body (including cerebral hemispheres) are innervated by fibers from both SNS (fight-or-flight) and PNS (rest-and-digest). There are a bunch of those nerves in the nose, too. We have one set of the nerves that covers the right side of the body and the right nostril, and another one that covers the left side and the left nostril. What scientists are finding now is that those fibers have opposing effects. This means that at any given moment you have sympathetic dominance on one side of the body (and breathe mostly through that nostril) and parasympathetic dominance on the other. Then some time later they switch. This is called “lateralized ultradian rhythms of the ANS”. So basically the nasal cycle is an indicator of the switch that happens between the SNS and PNS from one side to another.

Why does it matter? Well, multiple research studies show that the way your body functions is quite different based on which side of the body has sympathetic dominance. Here is what it looks like (I got the list from this article): 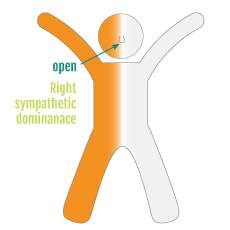 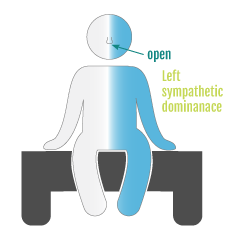 So basically in the course of the day you alternate between more active and more restful states, which is confirmed by a widely accepted BRAC hypothesis (basic rest-activity cycle). 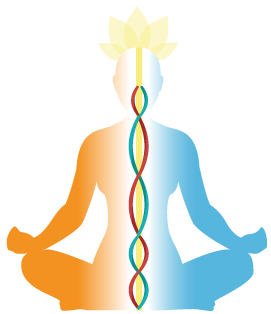 Yogis arrived at a similar discovery a while ago, though they have used different language to describe it. They said that our energy balance is affected by the flow of energy along three major channels: ida, pingala and sushumna nadis. Ida (lunar channel) is cooling and has overall feminine quality; it terminates at the left nostril. Pingala (solar channel) is heating and has an overall masculine quality; it terminates at the right nostril.

Breathing in through a nostril will emphasize the qualities of that channel; breathing out through the nostril will sedate the corresponding channel. This model is used widely in a therapeutic context. 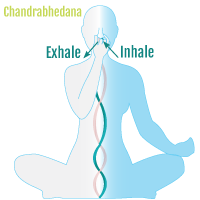 Sometimes there might be too much heat in the system (for example, if somebody has hot flashes or feels angry/irritable), which can be helped by breathing in through the Left nostril (to stimulate the lunar channel) and out through the right (to sedate the solar chanel). This pranayama practice is called Chandrabhedana. 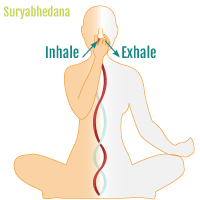 When there is not enough heat in the system (for example, cold limbs, low blood pressure, depression), it can help to breath in through the Right nostril (to stimulate the solar channel) and out through the Left (to sedate the lunar chanel). This pranayama practice is called Suryabhedana.

According to the tradition, when two sides are balanced, prana can enter the central channel – sushumna nadi – and travel upwards to the top of the head. Then eternal bliss (samadhi) is achieved. We’ll talk more about balancing the two sides next week. 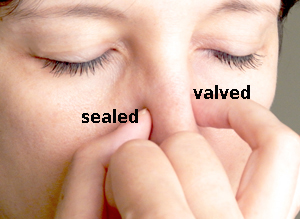 Another interesting fact: traditionally, when you breathe through one nostril or the other, you don’t leave it completely open, but rather valve it right next to the bony part of the nose, so that the opening is narrowed and a sort of vibration is achieved. We have mentioned earlier that there are many nerve branches of the autonomic nervous system in the nose, so may be valving the nose was meant to better stimulate the corresponding branch of the nervous system (SNS or PNS) and facilitate more pronounced energetic effect? One wonders. It certainly helps you make your breath cycle longer. You can try it for yourself, too. Next time you try one nostril breathing, try valving the nostril that you are breathing through – it is a very different experience.

Next week we will discuss how breathing through the individual nostrils is connected to the right-brain, left-brain idea. Tune in! 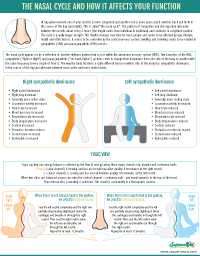 Go to Forms/Handouts on your Sequence Wiz home screen and you will find a pdf file of this handout. It’s yours to keep and/or give to your students.

RESEARCH ON THE SUBJECT